We are delighted to report that the Government Inspector has conclusively dismissed this appeal on the following grounds: 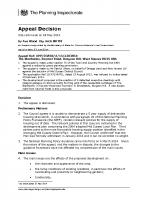 It is gratifying and re-assuring the the inspector has agreed with SOFLAGs argument that the characteristic and appearance of this part of the Keymer Road is distinctly rural and that this proposed development would appear totally out of place. More importantly she points out that parallels cannot be drawn with the previous backland developments along Folders Lane to justify similar backland developments in this part of the town. This is a significant point in our continuing fight to prevent inappropriate development in our area.

We are also delighted that the inspector has also supported our argument that the effects on the local wildlife and environment had not been adequately catered for and that this issue outweighs any benefits the additional housing may provide.

However, perhaps the most significant point from this decision is the inspectors total rejection of Omega’s argument that they should not have to include affordable homes within their plans. SOFLAG took a calculated risk in stressing this point in our written representations to the inspector but we have been proved to be entirely correct to do so as this decision will now present significant business case barriers to other developers wishing to cherry pick our green spaces for pure profit.

Be in no doubt this decision is the most crucial win that we have had to date as we know other developers are continuing to hold pre-application discussions with MSDC on similar developments in the immediate vicinity along the Keymer Road and Folders Lane.

That coupled with the renewed pressure by developers to re-open the debate on large scale development in the fields between Folders Lane and the boundary with Keymer (Site H) means this decision was crucial if were are to successfully fight these threats.

Many thanks to all our supporters who objected to this application and made representations to the inspectorate, despite the recent disappointments with the District Plan etc it good to know that we can still be heard and if we persevere we can make a difference.

At long last a date has been set for the Government Inspectors site visit, the visit will take place on the 28th May.

A number of our supporters will be directly affected by this inappropriate development and they have requested the inspectors also visits their properties during the day and representatives of SOFLAG will be there in support.

We cannot stress strongly enough how this application is the most serious threat we have faced so far in our fight to protect the area to the South of Folders Lane however the arguments for refusal are very strong so we can now only hope that the inspector will decide to uphold the MSDC decision and dismiss the appeal.

Details on the application can be found here.

There were 63 letters of objection to this application by the deadline of the 4th April and we would like to thank all of our supporters who took the time to send in their representation. We now await the MSDC planning officers decision but a positive step was at a meeting on the 31st March the Burgess Hill Town Council unanimously voted to recommend this application be refused permission citing all of the reasons we gave in our objection letter below.

Sadly despite 107 letters of objection and a recommendation by the town council that this application be refused the MSDC planning officer concerned has recommended this for approval when it comes before the next MSDC planning committee meeting. This is extremely disappointing however, one of our committee we will be speaking against this at the meeting so we remain hopeful the councillors will decide to overrule the planning officer and refuse permission.

The long awaited site visit by the government inspector took place on the 31st March, apart from visiting the actual site the inspector also visited three properties in Hazel Grove to gauge for himself  the effect this development will have on them. SOFLAG believe this is a positive sign and we now await the inspectors decision which should be announced within the next month.

Omega Homes Appeal to Planning Inspectorate To Build Nine Houses on the site of the Blenheims, Keymer Rd and Dormers in Broadlands

Despite the fact this appeal was lodged six weeks before the one by IndigoScott there is still no news as to when the government inspector will carry out a site visit. This is a bit of a concern as we believe the case against this application is clear cut and comprehensive. We can only hope the inspector isn’t minded to accept Omega’s claim they were treated unfairly by MSDC as that would be a total travesty.

The Neighbourhood Plan will be presented and discussed at the Annual Town Meeting at Cyprus Hall, Cyprus Road, on Wednesday 9 April 2014  at 19.30 hours. SOFLAG committee members will be attending.