If Sites SA12 & SA13 are allocated in the Site Selection DPD, this becomes a very real threat, something SOFLAG and Burgess Hill Town Council are keen publicise so that people responding to the consultation and the Inspector are aware of the consequences.

How could this happen? It’s because if the fields are developed, the built up boundary of Burgess Hill moves to their southern edge. According to MSDC planning policy and the District Plan, all the last remaining fields between BH and Keymer / Hassocks would then become fair game for developers because they are now “contiguous with the settlement boundary”.

And with the 500 houses at Clayton Mills already moving the northern edge of Hassocks closer to Burgess Hill, how long will it be before there is a single sea of concrete and houses between the two?

Developers already have their eyes on fields south of Wellhouse Lane, moving ever closer to Keymer, as this map from a “scoping” planning application in 2017 shows: 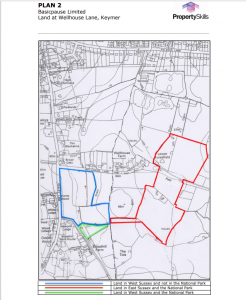